Disease Course Mapping in a nutshell

Neurodegenerative disease progresses over periods of time longer than the usual individual observations and with an important inter-individual variability. It directly prevents to straightforwardly disentangle a reference disease progression from its manifestation at an individual level.

For that purpose, we have developed a technique called Disease Course Mapping. Its aim is to estimate, both spatially and temporally, a unified spectrum of disease progression from a population. It directly allows to :

A picture is worth a thousand words¶

For the sake of clarity, in the following, we consider two biomarkers that have been normalized such that a value of 0 corresponds to normal (i.e. control) stages where 1 corresponds to pathological stages.

The aim of the model is to describe the progression of the biomarkers across the course of the disease. Let’s here assume that it corresponds to two idealized logistic curves as shown on Fig. 3. Given this average progression, how is it related to the observations of any new subject?

As shown on Fig. 3, we consider that the individual observations are variation of the average progressions in the sense that they derive from the mean biomarker trajectories, based on three subject-specific parameters :

It accelerates (\(\alpha > 1\)) or deccelerate (\(\alpha < 1\)) the overall disease progression, i.e. it changes the slope of the logistic curves

It accounts for the fact that the ordering of the event (i.e. biomarker progression) might differ within the population, therefore to each patient corresponds a given sequence of events described by the vector \(\omega\) that shifts each logistic curve. [Note: To ensure identifiability with the parameter \(\tau\), we enforce \(\sum \omega_k = 0\) ].

Fig. 4 Variation of the average trajectory to the individual data in the Disease Mapping space.¶

The procedure that allows to derive the average trajectory can also be shown in the space of the biomarker, as shown on Fig. 4. It shows how the average progression is changed to fit the individual data - and vice-versa.

Though, a question still holds

How do we first estimate the average progression of the biomarkers from which any individual observations derive? 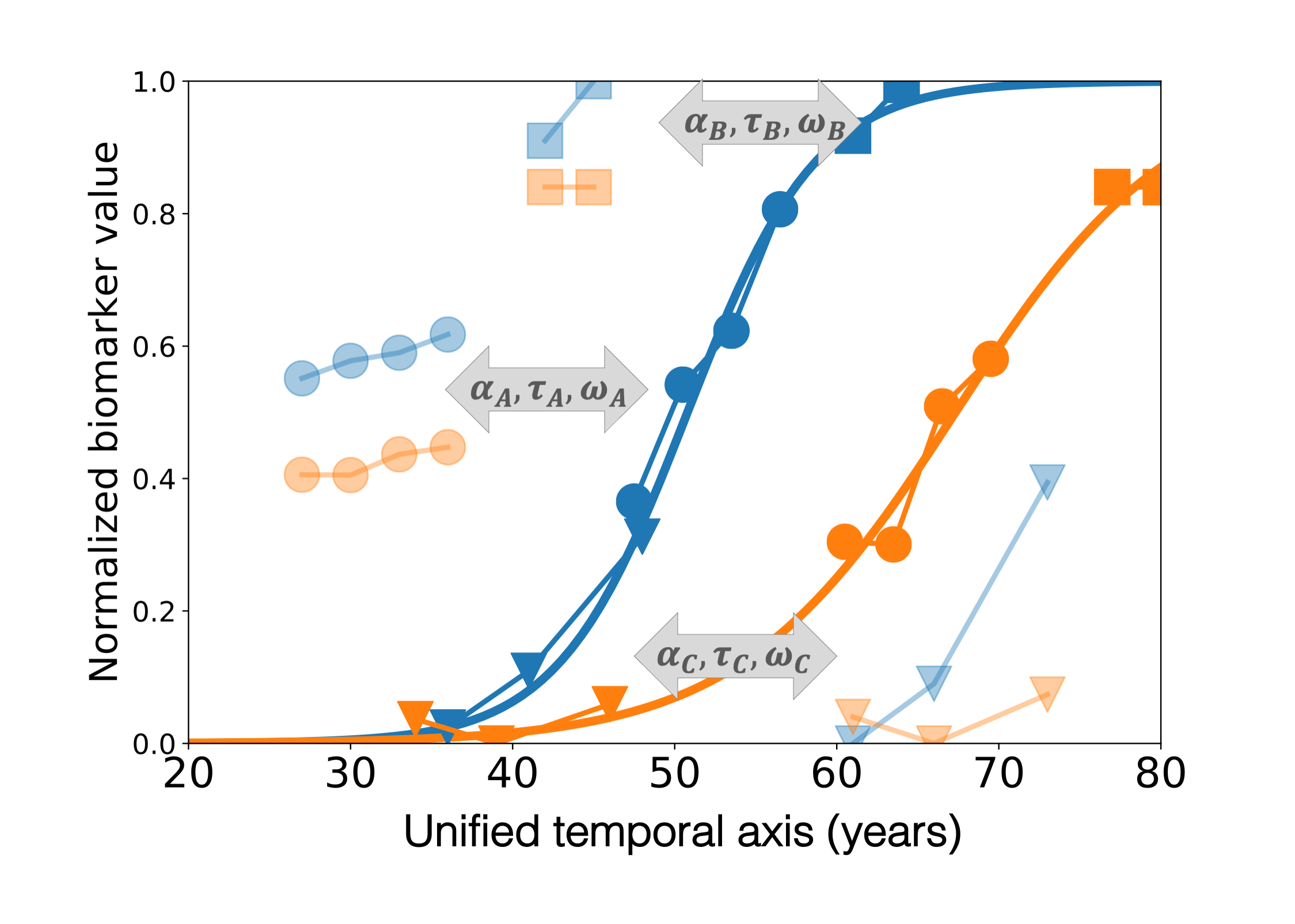 In practice, the average model of progression and the individual parameters are jointly estimated such that :

This procedure is sketched on Fig. 5 which shows that the average model corresponds to the recombination of the short-term individual measurements onto a long-term disease progression that spans different disease stages.

Then, once the model has been estimated, the estimation of the parameter of a new patient given this data corresponds to an optimization procedure, that under-the-hoods minimize the fit to the data and a regularization term over the individual parameters that follow normal distributions.

As we derive a continuous model to fit the individual data, we can predict the future biomarkers values base on the patient observation as shown on Fig. 6. Such procedure can be done from a baseline visit only, and, has shown to be accurate (up to the noise level of the data) up to 5 years in advance. 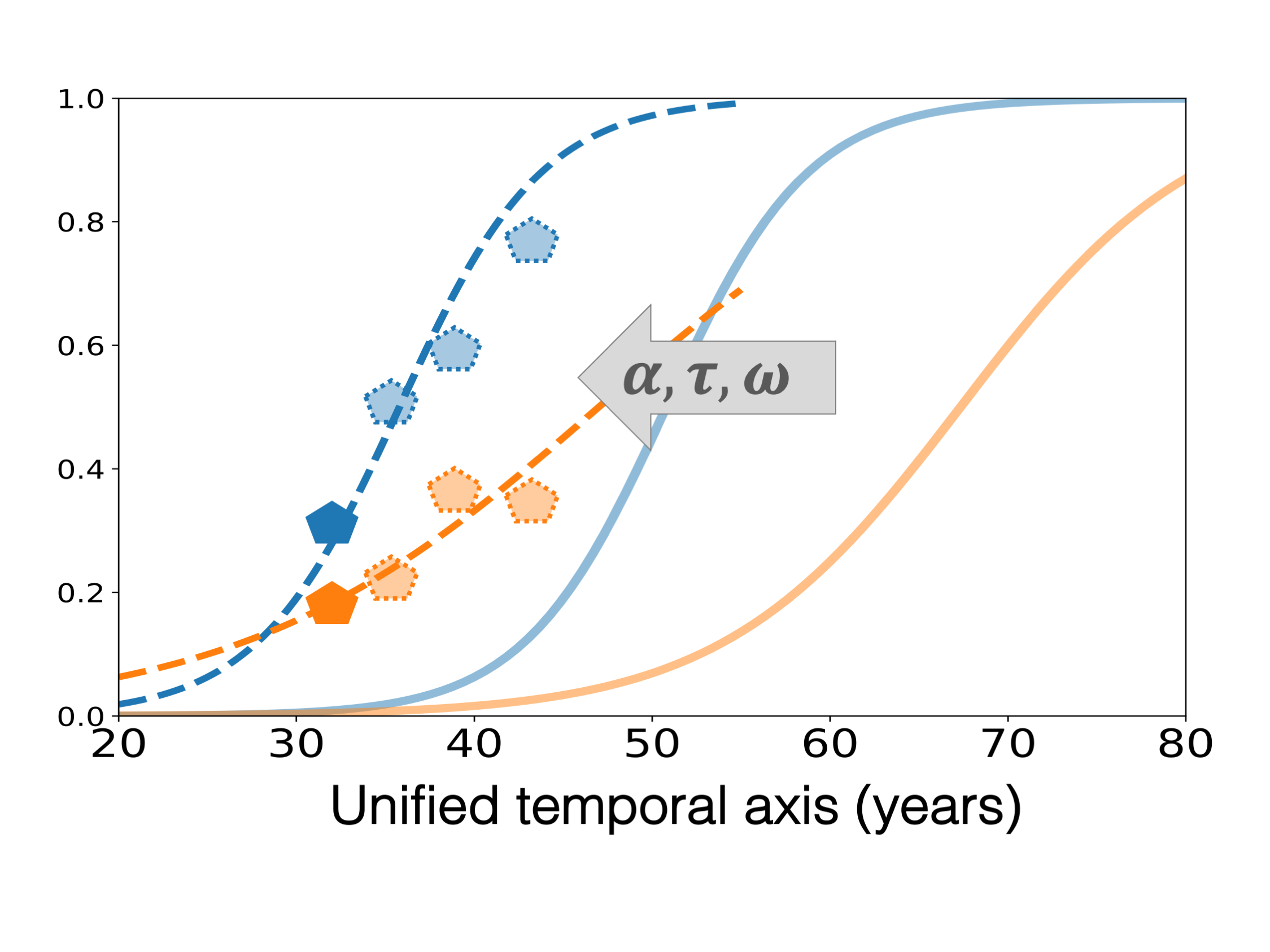 Fig. 6 The personalization of the average trajectory to the individual data allows to predict the future values of the different biomarkers.¶

Disease Course Mapping as a software

Interested by this model? You want to test it on your own data?

It is made very easy thanks to the Leaspy software package. Give a look at the tutorials here.

More detailed explanations about the models themselves and about the estimation procedure can be found in the following articles :